Like most writers, I'm a reader. Always have been; always will be.  I read fiction, non-fiction, good books, bad books, books for adults, and books for young people. Books give me knowledge, pleasure, insights, and escape. Books take me places I’ve never been. Books help me better understand the world and the people in it. So I keep reading. And here, I’ll share what I’m reading with you. 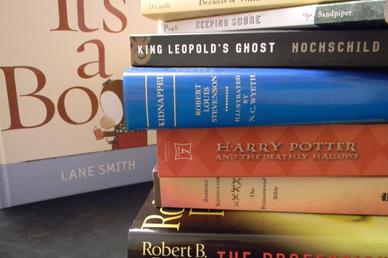 Keeping Score, by Linda Sue Park. Set in Brooklyn in the 1950's, this is the story of a young girl and a neighborhood fireman, drawn together by their love for baseball, until he is called to serve in the Korean War. I loved this book because Linda Sue (who lives near me) is a fantastic writer and all of her books are good, but also because it's about MY team. I grew up, like the main character, Maggie Fortini, rooting for Duke Snider, Pee Wee Reese, and all the other Brooklyn Dodgers.

The Truth as told by Mason Buttle, ​by Leslie Connor. This is one of the best kids' books I've read in a long, long time. Writers often talk about finding their main character's voice. Mason Buttle has a voice you'll never forget. A 7th grader, Mason is a school outcast because of his size, his learning disabilities, and his personal hygiene. He is grieving for the loss of his parents and his best friend, whose death is still being investigated by local police. But Mason Buttle has a heart bigger than Alaska, and a story you won't forget.

The Master of Ballantrae by Robert Louis Stevenson. A sort-of psychological thriller set in Scotland and New York's Adirondack Mountains (Stevenson lived there for a time). It's been made into a movie twice. The first one, a 1950's swashbuckler with Errol Flynn, had only a bare resemblance to the book. The second one, made in the 1980's is much truer to Stevenson's story.

The Devil in the White City, by Erik Larson. A marvelous book. It's the history of world’s fair (officially the Columbian Exposition) held in Chicago in 1893. An architect named Daniel Burnham headed the design team, and eventually assumed sole control of the design, construction, and supervision of the fair. That alone is an amazing story, but the book also tells of the simultaneous appearance in Chicago of the first mass murderer in US history, the devil in the title. The White City was the mile-square fairgrounds, so called because all of the buildings were painted white.​